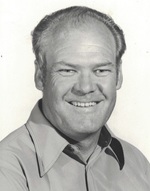 Following his marriage to DeLone, he was drafted and served in the Army Signal Corps during the Korean War, stationed at Fort Lewis, Washington. Elmo graduated from BYU in Biological and Agricultural Sciences and then began working for Bailey’s Moving and Storage in Orem Utah. He eventually was able to purchase his own business, Warberg Moving and Storage in Twin Falls Idaho, which flourished under his skill and admirable work ethic. In a few short years he changed the name to Muir Moving and Storage and built several warehouses where he stored furniture, fertilizer, seed and oil products for local growers. He was an admired member of the community there and belonged to the local Rotary Club and American Legion. As Commander of the American Legion he helped organize and promote several programs, including taking 2 semi-truck loads of food to the VA hospital in Boise each year.

He was known in his community of Springville for his service to others whether it was serving with the Kiwanis, hauling supplies for girls camp or clearing snow from streets in the neighborhood. He owned several apartment units and tried to keep rents low to assist students balancing school and family. He was a faithful member of the LDS church and diligently fulfilled his callings. He also served in the Provo LDS temple and MTC and assisted many missionaries in their desire to serve. His hobbies included oil painting, woodworking and camping. He was strong both physically and mentally and taught his children to cultivate the traits of hard work, tenacity and faithful service to God and Country. Family loyalty was a central principle of his life and guided him in many of his decisions. He put smiles on the faces of those he served and added value to the lives of many.

Elmo’s wife Delone preceded him in death January 4, 2019. He is survived by his four children; Richard Muir (April), Kathy Parker (Lewis), Eric Muir (Sandra), Glen Muir (Cammie) many grandchildren and great –grandchildren and his sister Carma. He was also preceded in death by his parents, brothers Robert, Golden and Merlin and sisters Emelia, Wanda and Norma. His generosity and great example will be missed by all who knew and loved him.

Due to gathering restrictions, attendance at the funeral is by invitation only. For those who would like to participate virtually, a live stream can be viewed on Spring Creek Utah County Mortuary facebook page on Wed, July 22nd at 11:00 a.m. at the following link: https://www.facebook.com/springcreekmortuary