To share your memory on the wall of Christopher Taylor, sign in using one of the following options:

Chris also loved all things Disney: the parks, the movies, the magic, the trivia. His family always held
annual passes and would visit the parks for family night, in all seasons, and even in the middle of the
school day after a trip to the dentist. One of the highlights of his life was a weeklong adventure to Disney
World, planned with his best friend and brother, David. Further, for two years, Chris lived his dream as a
cast member in California. He shared his Disney expertise with extended family and later his wife,
guiding them through the parks with an insider’s knowledge.

Faith was very important to Chris. Always active in the Gospel, Chris served a mission for the Church of
Jesus Christ of Latter-day Saints in the Romania Bucharest Mission and developed a lasting love of the
Romanian language, culture, and people. In later life, he put his heart into sharing the Gospel with the
primary children he taught.

Chris loved children, and they loved him. Primary lessons received his full attention, and he spent three
years teaching Special Education Math to kids at American Leadership Academy. He took great joy in
playing with all children, whether cousins, nieces, nephews, or the children of his friends. No one could
help but smile at his amazing imagination and silly games.

Chris attended Brigham Young University (BYU), where he received a bachelor’s degree in Political
Science and used the skills he learned there to work on several political campaigns.

While attending BYU, Chris met the love of his life, Sarah Walker, in November 2015 on the dating app
Tinder, which was a constant source of laughter in their relationship. Chris loved to make Sarah smile and
laugh with funny faces and goofy poems. After nearly a year and a half of courtship, they were sealed for
time and all eternity in the Mt. Timpanogos Temple on April 7, 2017.

Chris and Sarah lived in Springville, Utah. They loved taking walks together, building things in
Minecraft, and playing board games. Spending a lot of time with their many friends was an important part
of their daily life—sharing meals, playtime with kids, and even more board games. Their love for each
other glowed and was evident to those around them.

Although he hid his anguish well, Chris suffered a severe and deep depression. He received treatment and,
in the weeks before his death, showed improvement and new healing. After a long-fought battle, Chris
tragically died by suicide on New Year’s Eve.

We will forever remember Chris as a loving husband, devoted son and brother, and cherished friend. His smile softened hearts and brought out the child in all of us. He fiercely loved his family and friends, and we will love and miss him eternally. We look forward to the day when we are reunited.

To express condolences and share memories of Chris, please go to www.springcreekmortuary.com

To send flowers to the family or plant a tree in memory of Christopher Michael Taylor, please visit our Heartfelt Sympathies Store.

Receive notifications about information and event scheduling for Christopher

We encourage you to share your most beloved memories of Christopher here, so that the family and other loved ones can always see it. You can upload cherished photographs, or share your favorite stories, and can even comment on those shared by others.

Sharon, David and Ashley Soard and Pres. and Sis. Lundberg and former Romania mission sent flowers to the family of Christopher Michael Taylor.
Show you care by sending flowers

Posted Jan 07, 2021 at 01:58am
We know that your love will continue. Both of you are in our thoughts and hearts. Sending wishes of love and comfort.

Posted Jan 06, 2021 at 09:21pm
We deeply mourn the passing of Christopher. We have special memories of him. He is our oldest grandson and our second oldest grandchild, with over thirty younger cousins! What a delight it has been to see him entertaining and playing with these cousins, particularly those who were almost a generation younger. These little children really love their much bigger, “really fun” cousin who took the time to play with them at family get-togethers--and it was clear that the feeling was mutual.
Another strong and beautiful memory we have of Chris is the joy that was evident when he introduced us to Sarah and then of the love we could see growing between them during their courtship and life together. With the Mt. Timpanogos Temple up the hill as a background, we were delighted to cohost the outdoor wedding luncheon in their honor in the little park and gazebo near our home at Stone Hollow in American Fork. What cherished memories we have of this tall, handsome young man and his lovely, joyous bride enjoying these early happy moments of their married life together! We love you!

Posted Jan 05, 2021 at 04:49pm
"Christopher Taylor" will remain in our hearts forever. May your heart and soul find peace and comfort. 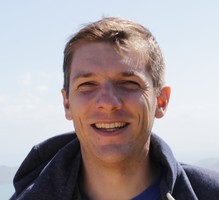